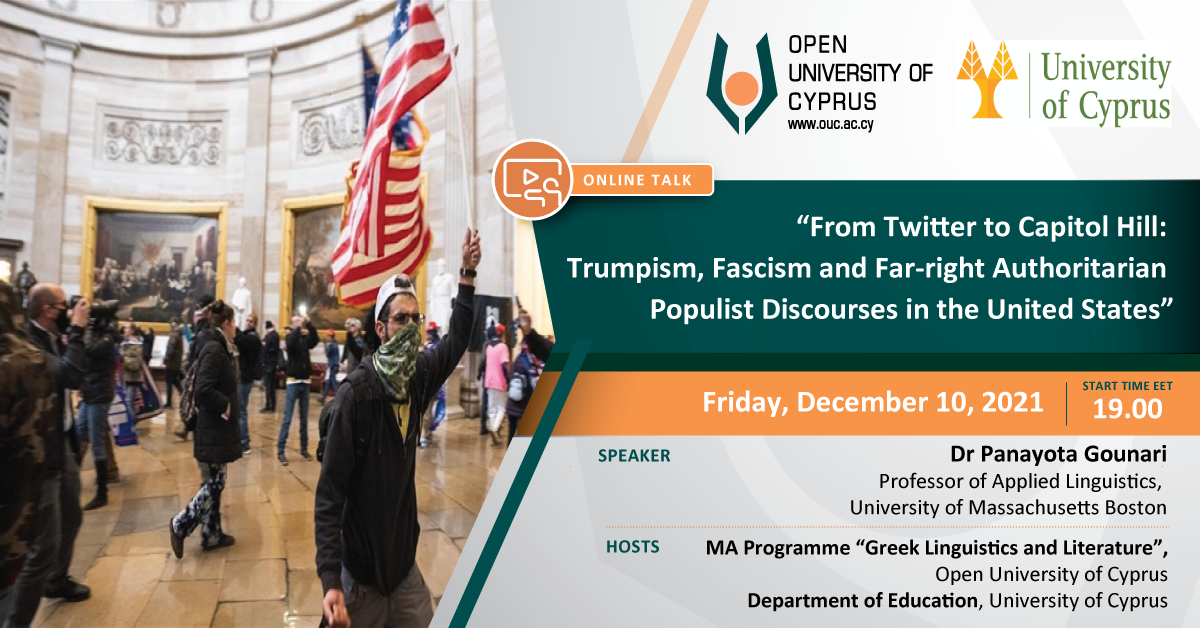 The lecture will be held on Friday, December 10, 2021 at 19:00 EET, and it will be broadcasted through the OUC eLearning Platform:  https://bit.ly/3rxTzZm

Abstract: Throughout his presidential campaign and four years in office, Trump’s rhetoric helped fuse the various factions of the far right as the latter gained in power and visibility thanks to the political cover provided by the White House. Starting with a question regarding the rise of far-right extremism and neo-fascism in the United States and drawing on Critical Discourse Studies and the one-dimensional authoritarian discourse framework inspired by Critical Theory, in this talk I explore how conservative social media have been used as a platform for far-right discourses, the features of these discourses and the kinds of social practices that are shaped and mobilized by them. The analysis builds on four different discursive moments: Trump’s speech at the Ellipse, Parler and Telegram digital chatter and select Twitter posts in the time period between December 31st, 2020 and January 12th, 2021; neo-Nazi Iron March Platform posts; and the actual events at the Capitol. The exploration and critical analysis of the discursive manifestations of far-right authoritarian populism and Nazism on social media reveals how in their obscurity and anonymity, deeply dehumanizing ideologies are becoming normalized. The vehicle is usually a language of aggressiveness that annihilates and dehumanizes the other. Using Critical Discourse Analysis, argumentation strategies, topoi and discursive themes in the social media under review are presented.

Bio: Panayota Gounari is Professor of Applied Linguistics at the University of Massachusetts Boston. She has published extensively on authoritarian and neoliberal discourses and critical pedagogy. Her most recent books include From Twitter to Capitol Hill: Far-right Authoritarian Populist Discourses, Social Media and Critical Pedagogy (Brill, 2022) and Liberatory and Critical Education in Greece: Historical Trajectories and Perspectives (Gutenberg, 2016, co-authored with G. Grollios).